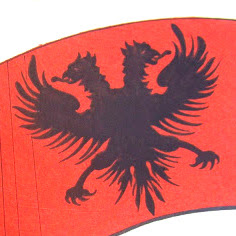 Click here for full size image of the document!

The document from 1902 explains that these postcards feature the image of Juan Pedro Aladro Kastriota, who claimed descent from Skanderbeg, a famous 15th century Albanian nobleman who was also an Ottoman governor that rebelled against the Ottomans and became an obstacle to their early expansion. In claiming descent from Skenderbeg, Kastriota, a Spanish citizen, was thus claiming a place as an Albanian nationalist leader and pretender to the Albanian throne, which was theoretically threatening for the Ottomans.

These postcards circulated throughout European captials such as Paris, Rome, Athens and St. Petersburg. They were found on two individuals, Nuri Frashari and Basco Barbatassi, who wanted to destribute them in the Ottoman Empire. They were found alongside a calendar printed in Albanian, which is not contained in the folder. 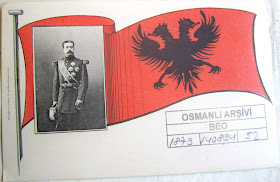